In 1919 he amalgamated with Mr. Václav Šrefl and established the company Šrefl and Jindra, later registered as Jindra and Šrefl. Then produciton programme included wide variety valves from small brass water valves over gas valves up to steam valves made of cast steel, including steam safety valves. At the end of 1929 both partners were separating and both founded own factory in Česká Třebová for manufacturing of industrial valves. Nowadays the former Šrefl´s factory is the part of production facilities of LDM.
After nationalization in 1948 both companies changed their names several times till 1975 when became a part of worldwide known Czechoslovak concern Sigma Lutín. After so-called velvet revolution is the Sigma concern separated to different companies which were privatized or restored.
Also the Sigma Česká Třebová was privatized and became an joint-stock company, nevertheless the company became bankrupt in 1995. LDM bought it and became the continuator of more than 100-years of valves manufacturing tradition in Česká Třebová. Currently LDM is strongly export-oriented company with more than 220 employees and LDM industrial valves can be found worldwide particularly in power generation, industrial processes, heating, ventilation, air conditioning, gas industry and other applications. LDM product range includes control valves, shut-off valves and safety valves in pressure ranges from PN 6 to PN 630 and dimensions from DN 10 to DN 600. The wide product portfolio is a reason why LDM valves can be found in almost all fields of human activities where it is necessary to control a flow, pressure or temperature.
LDM has its own subsidiary in Slovakia, Poland, Bulgaria, Germany, Russia and Kazakhstan and many authorized partners in other countries.
LDM has also well-established and certified integrated quality management system according to standards ISO 9001, ISO 14001 and OHSAS 18001 which it is ensuring permanent quality and a high level of all company processes.
As follows from above mentioned, LDM company dignity continues the long-time tradition of industrial valves manufacturing in Česká Třebová to which proudly claims as its successor. The company´s future consist in fulfilment of the vision that was allready defined in 1995: Sucessfull fulfillment of the vision results from the conviction, that three main pillars on which the company stands are strong. The first pillar are our customers and their needs whose satisfaction is directed effort of the whole company to. The second pillar are our products. LDM is company which firmly stands on its own development, so the cycle of a development, design, manufacturing, sale and service is closed. The third and no less important pillar are own employees who are able to respond flexibly to constantly changing market requirements and who are able to actively and jointly form the company future. Ultimately, not only many awards from international exhibitions from past, but also many OEM products, whose LDM manufacture and delivers to many other producers under their own brand, recognize the high quality of LDM production and confirm the right way, which LDM took in 1991.

The company vision defines long-term objectives in the development of LDM and it can be summarized in the following three points:

The IMS in LDM is in accordance with requirements of laws and regulations in the sphere of quality, environment and safety and health protection at work. It is understood by all employees as a mean by which the needs, requirements and customer expectations are constantly met and even exceeded and a mean for environmental protection and ensuring a safe and healthy workplace.
The objective of this IMS is customer satisfaction and the criteria of all the effort of the company.
IMS Policy of LDM, spol. s r.o. is to provide only those products and services that meet the demands of customers, gaining their complete satisfaction, are safe and environmentally friendly.
To ensure compliance with policy of IMS, LDM activities are all carried out under the following main principles: 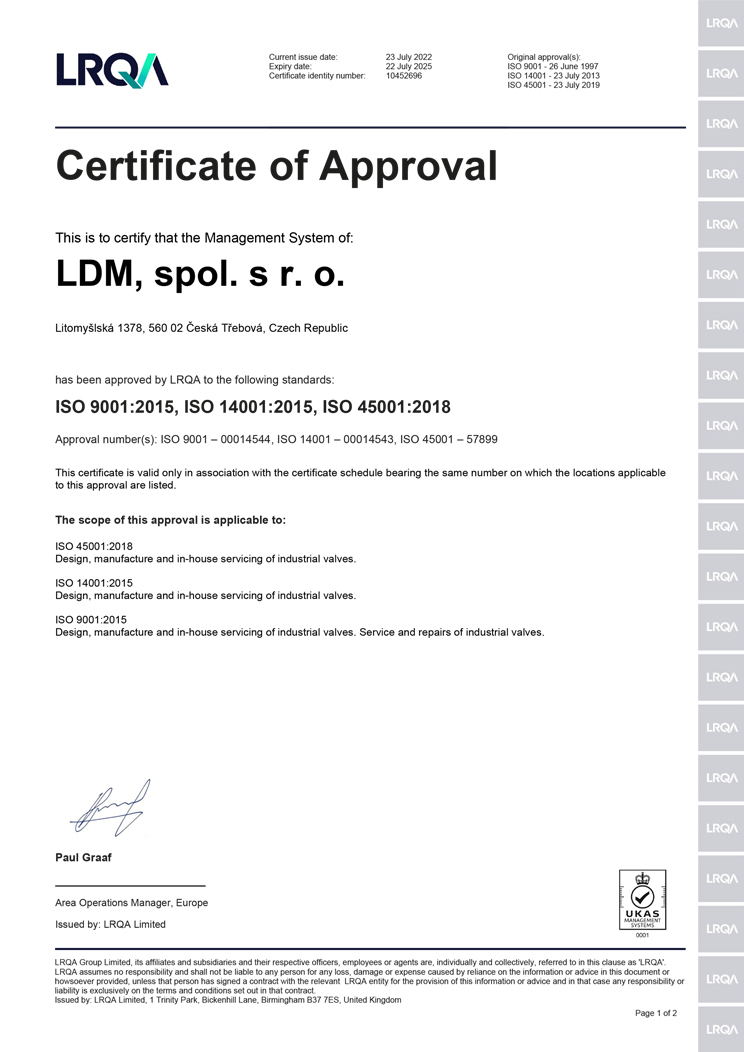